Joseph William "Joe" Frazier, also known as Smokin' Joe, was an American professional boxer, Olympic gold medalist and Undisputed World Heavyweight Champion, whose professional career lasted from 1965 to 1976, with a one-fight comeback in 1981.

Frazier emerged as the top contender in the late 1960s, defeating opponents that included Jerry Quarry, Oscar Bonavena, Buster Mathis, Eddie Machen, Doug Jones, George Chuvalo and Jimmy Ellis en route to becoming Undisputed Heavyweight Champion in 1970, and followed up by defeating Muhammad Ali by unanimous decision in the highly anticipated "Fight of the Century" in 1971. Two years later Frazier lost his title when he was knocked out by George Foreman. He fought on, beating Joe Bugner, losing a rematch to Ali and beating Quarry and Ellis again.

Frazier's last world title challenge came in 1975, but he was beaten by Ali in their brutal rubbermatch. He retired in 1976 following a second loss to Foreman. He made a comeback in 1981, fighting just once, before retiring. The International Boxing Research Organization rates Frazier among the ten greatest heavyweights of all time. In 1999, The Ring ranked him the 8th greatest heavyweight. Source: Wikipedia 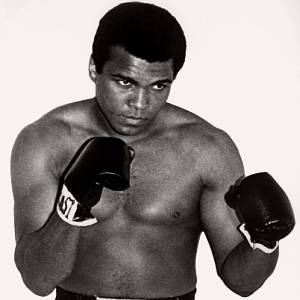