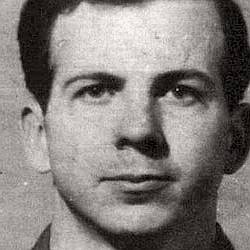 Lee Harvey Oswald was, according to five U.S. government investigations, the sniper who assassinated John F. Kennedy, the 35th President of the United States, in Dallas, Texas, on November 22, 1963.

Oswald was a former U.S. Marine who defected to the Soviet Union in October 1959. He lived in the Soviet Union until June 1962, at which time he returned to the United States. Oswald was initially arrested for the murder of police officer J. D. Tippit, who was killed on a Dallas street approximately 45 minutes after President Kennedy was shot. Oswald would later be charged with the murder of President Kennedy as well but denied shooting anybody, claiming he was a patsy. Two days later, while being transferred from police headquarters to the county jail, Oswald was shot and mortally wounded by Dallas nightclub owner Jack Ruby in full view of television cameras broadcasting live.

In 1964, the Warren Commission concluded that Oswald acted alone in assassinating Kennedy, firing three shots. This conclusion was supported by prior investigations carried out by the Federal Bureau of Investigation, the Secret Service, and Dallas Police Department. Source: Wikipedia